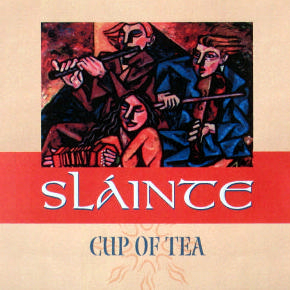 Cup of Tea was the last album from the Washington Celtic group Sláinte (slawn-cha).

Sláinte is an important group in the history of online music. The band serves as an early case study for the benefits of making music available for free online. They were one of the most downloaded artists on the original mp3.com, which was then a major site for free and legal music downloads. Their self-titled first album was available at mp3.com both for free and for sale, and they sold hundreds.

Acoustic Guitar magazine writer Jeffery Pepper Rodgers interviewed Sláinte member Jean Huskamp in his cover story article "The World Wide Open Mic: A player's guide to the world of online music," in which he asks, "So how did this happen to a good but not highly unusual Celtic band that does no national touring?" To which Huskamp replied:

"Well, I’ve thought a lot about this," says Huskamp, "and I think, although it sounds paradoxical, it’s because we put out such a large quantity of cuts for free download that we’ve sold so many [mp3.com format] CDs. My thought at the beginning ran something like this: we’ve had this self-published CD out for more than a year, we’ve sold about a thousand copies at gigs and through personal contacts, we don’t tour and have no distribution--why not put our music out for people who otherwise would never hear us? Because we had so many tracks out there early in MP3.com’s history, we had a proportionately large number of downloads which, I expect, were noticed by the MP3.com folks, who started featuring our songs on first- and second-level pages as well as including ‘Star of the County Down’ on the first 103 Best Songs You’ve Never Heard compilation. Our music was included, as one of only 16 cuts, on the CD that accompanied the July 1999 Macworld magazine and is on the CD of the Complete Idiot’s Guide to MP3 book.

"I went down to the MP3 summit in June and heard two anecdotes in keynote addresses that confirmed my feeling about giving it away. They’re both from John Perry Barlow, the sometime Grateful Dead lyricist. He was consulting with a band in Australia who wanted to Make It. He suggested making their music available as free downloads, and they said, ‘But folks will rip us off!’ ‘Your problem,’ he replied, ‘is that you’re not being ripped off enough!’

"The second story concerns the Grateful Dead. They really did not like the bootleg tape business at the beginning. They actually discussed trying to stop it but realized how bad it would look if they were busting their fans. So they actively supported taping and tape trading through newsletters, bulletin boards, announcements, etc. Before they supported tape trading, Barlow said, they were performing in American Legion halls; afterwards, they became second only possibly to the Rolling Stones as the most popular touring band in the world. They became huge by giving it away."

The Free Music Archive also hosts that first historic album from Sláinte that made the case for free sharing of music online, as well as a set of bonus Sláinte material including four cuts of live performances with choirs and two of mp3.com only tracks

3 - The Butterfly. Kid on the Mountain

9 - Lark in the Morning. The Atholl Highlanders

10 - She Moved Through the Fair

11 - The Crosses of Annagh. The Humors of Tulla. The Cup of Tea